Bulgaria « A beautiful story on the Black Sea Coast »

We spent two weeks in February 2013 on the shores of the Black Sea in northeastern Bulgaria, where thousands Geese are wintering near to the Romanian border. There is mainly Greater White Fronted Geese, mixed with the rare Red Breasted Geese that are on the IUCN Red List of endangered species. The world population is estimated around 30.000 individuals only, and is dangerously decreasing every year. Almost all of those geese are nesting in North Siberia (Taymyr Peninsula), and are wintering mainly in two major places : the Danube delta in Romania, and in Bulgaria on Durankulak and Shabla lakes.

This is where we participated to an International program of Red-Breasted Geese protection, organized by the Foundation “Balkan Bulgarie”, “Branta Tours” and the American services of “US Fish and Wildlife”.

To have a better knowledge of the specie, the purpose is to install some small satellites transmitters on their back, for following their migration and stopovers across Russia. There was a first success in 2012, with a goose named “Teddy”. He covered a distance of 4.500 km, from Durankulak lake in Bulgaria until north of Kazhakstan, where his journey brutally stopped ….. under the bullet of hunters!

The goose on the pictures below, was captured on February 14th of 2013 (Valentine Day), a good sign for his destiny !

Right before being released, a transmitter was installed on his back. In the general enthusiasm, this young male was symbolically named “Teddy II (Valentine)”.

On June 24th, the signals of his transmitter sent the information that he was reaching his summer grounds in Siberia (Yamal Peninsula), after a four month travel !

A beautiful story that you can follow on the Bulgarian-US Project website (http://www.redbreastedgoose.org/) In 2013, three Red-Breasted Geese were followed with success until their breeding place. 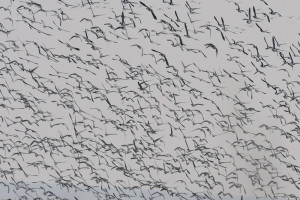 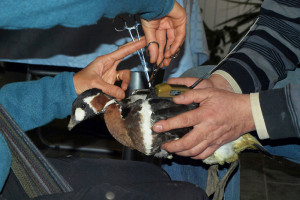 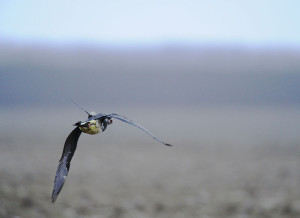 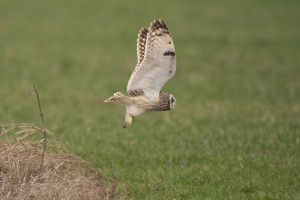 Short-Eared Owl near to the Black Sea Coast